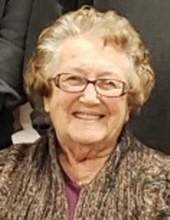 A gathering of friends and family will be held one hour prior to the services at the church on Wednesday.

Inurnment of cremains will be held in Madison Township Cemetery in Forest City.

The family requests that in lieu of flowers, memorials may be directed to the First United Methodist Church in Forest City.

Dixie L. Rauk was born in Forest City, Iowa the daughter of Burtis and Bernice (McFarland) Benson. She attended and graduated from Forest City High School in 1953. Dixie was married to Carlyle James Rauk on June 9, 1954, for thirty-three years they operated a dairy farm in the Forest City area.

Dixie started Country Lefse and operated this for many years, she enjoyed the many hours she worked beside her sons and other family members. Dixie and Carlyle started and organized the first Frontier Days Parade and helped run this event for the next twenty years.

An active member and Lay Minister of the United Methodist Church in Forest City, she was very involved in her circle, organized many events and activites and especially was passionate about Faith Village; a after school program she helped to start at the church.

Dixie loved his family above all else. For more than sixty years, Dixie supported their children, grandchildren, and great grandchildren at all of their extracurricular activities. She will be dearly missed by all who knew and loved her.

She was preceded in death by her parents and husband, Carlyle in 2012.
To send flowers to the family in memory of Dixie L. Rauk, please visit our flower store.