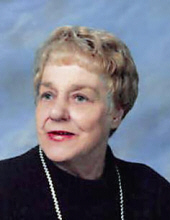 Funeral services will be held 10:30 A.M., Wednesday, October 5th at the United Methodist Church in Garner with Rev. Paul Evans officiating. Burial will be at Concord Township Cemetery in Garner.

Visitation will be held from 5 to 7 P.M., Tuesday at the Cataldo Funeral Chapel, 160 E. 4th St., in Garner with a VFW Auxiliary service at 4:45 P.M. Visitation will resume one hour prior to services at the church.

Dolores Eileen Hayworth, the daughter of Roland and Marie (Lipscomb) Schaefer, was born August 1, 1934 in Bloomington, Illinois. At the age of four, she moved with her family and step-father, Harry Raber to Kanawha. Dolores graduated from Kanawha High School in 1951. On July 10, 1954 she was married to Norman Hayworth at the United Methodist Church in Kanawha. They resided in Kanawha and Klemme before moving to Garner in 1978. Dolores worked for twenty-four years at the Hancock County Courthouse and for the State of Iowa. She enjoyed her family, reading and writing poetry.

She was a member of the United Methodist Church in Garner, Rebekah Circle, Garner VFW Auxiliary, Women’s Club and Literacy Club.