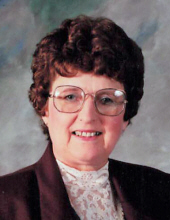 Our Lady of Lourdes Catholic Church

A memorial mass will be held 10:30 a.m., Friday, February 4, 2022, at Our Lady of Lourdes Catholic Church in Lourdes, Iowa with Rev. Fr. Jerry Kopacek officiating. Burial will be in the church cemetery.

Visitation will be one hour prior to services at the church on Friday. Cataldo Funeral Home is in charge of arrangements.

In lieu of flowers, memorials are preferred to the donor’s charity of choice in memory of Dolores.

Dolores Genevieve Opat-Ludwig, the daughter of Matthew and Genevieve (Bilek) Ludwig, was born May 6, 1934, in Elma, Iowa. She attended Our Lady of Lourdes Catholic School and graduated from Immaculate Conception High School in Elma in 1951. On June 29, 1951, she was married to Wesley Opat at Our Lady of Lourdes Catholic Church in Elma. They lived on farms near Elma and Lime Springs, Iowa, in Howard County where they raised their family for 40 years. Dolores was employed at the hospital in Cresco and at St. Marys Hospital in Rochester as an emergency medical tech. In 1998, she moved to Clear Lake, Iowa. Dolores also did home care in Clear Lake for several people over the years. She enjoyed sewing and quilting.

She was a member of St. Patrick Catholic Church in Clear Lake where she belonged to a Bible study group.

She was preceded in death by her parents; son, Joel Opat in 2010; her son, John Opat in 2015; former husband, Wesley in 2001; a grandson, Christopher Opat in 2010; brother, Alphonsus Ludwig; and sister, Genevieve Grover.
To order memorial trees or send flowers to the family in memory of Dolores G. Opat-Ludwig, please visit our flower store.
Send a Sympathy Card

Our Lady of Lourdes Catholic Church