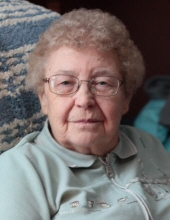 Dolores Jane Sandifer, 82, of Fertile, died Thursday, May 5, 2016 at the Hancock County Memorial Hospital in Britt

Funeral services will be held at 2:00 P.M. on Saturday, May 7, 2016 at Calvary Baptist Church in Forest City with the Pastor Don Collings officiating. Burial will be in Brush Point Cemetery, rural Hanlontown.

Visitation will be held on Saturday, one hour prior to the services at the church.

Memorials may be directed to the Calvary Baptist Church.

Dolores, the daughter of August and Ernestine (Brandt) Jordan was born September 14, 1933 in rural St. Ansgar, Iowa. She attended school and graduated from Fertile High School. She continued her education at Waldorf College in Forest City, graduating with a 2 year secretarial degree. She worked at St. Olaf College in Northfield, MN for a period of time before her marriage to Ray Sandifer on October 20, 1953 at the Fertile Lutheran Church. She worked for many years at Norwest Bank in Mason City until her retirement in 1989. She was the long-time editor of the Fertile Reminder newspaper, an avid rook card player and she enjoyed playing piano. She enjoyed the times she spent with her family and especially her grandchildren and great-grandchildren. Dolores was a long-time member of the Calvary Baptist Church, where she served as Treasurer and sang in the church choir. She will be dearly missed by all who knew and loved her.

Left to cherish her memory are her husband, Ray of Fertile; son, Rick Sandifer and wife Kathy of Bensalem, PA; granddaughters, Kelly Sandifer of Hopatcong, New Jersey and Kristen Ryland and husband Stephen of Lewisville, TX and two great-grandchildren, Claire and Calvin Ryland; brother, Raymond Jordan and wife Deanna of Fertile and many nephews and a niece.

She is preceded in death by parents and son, Gary Ray Sandifer.
To order memorial trees or send flowers to the family in memory of Dolores Jane Sandifer, please visit our flower store.
Send a Sympathy Card