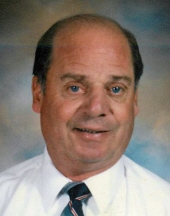 Funeral services will be held 10:30 A.M., Tuesday, November 26th at Zion Lutheran Church in Clear Lake with Pastor Kirk Wilke officiating. Following the service his body will be cremated. Inurnment will be held at a later date in Concord Township Cemetery with military rites by the Garner Veterans Ceremonial Unit.

Visitation will be held from 3 to 7 P.M., Monday at the Cataldo Funeral Chapel, 160 E. 4th St., in Garner and will continue one hour prior to services at the church.

In lieu of flowers, memorials may be directed to the Garner-Hayfield Education Foundation to be used for a track/photo timing system or to the donor's charity of choice.

Donald A. Hoppel, the son of Clarence and Connie (Wenzel) Hoppel, was born April 10, 1935 in Belmond. He graduated from Belmond High School in 1954. He attended Webster City Junior College and from there continued his education at Iowa State Teacher's College in Cedar Falls graduating in 1958. Don served his country in the Iowa Air National Guard in Fort Dodge from 1958 to 1964. He signed a teaching contract at Garner-Hayfield Community School District for the 1959-1960 school year. He taught 7-8th grade science, was the athletic trainer and coached football, basketball and track. He received his master's degree from Northeast Missouri Teacher's College in Kirksville, MO in 1964. In 1965, he became building principal for grades 5-8. On August 12, 1967 he married Linda Gipp of Decorah. They were blessed with two sons, Scott and Mark. In 1969, Don was named the school's Athletic Director. Two of his many highlights during his athletic director's tenure was the 1991 football team winning the 2-A State Football Championship and the all weather track being named after him in 1993. Don retired from his teaching duties at Garner-Hayfield in the spring of 1993. After his retirement, he enjoyed contact with students as a substitute teacher, working at Garner-Hayfield sporting events and watching Iowa football and basketball games. Don was named Grand Marshal of the 2008 Garner-Hayfield Homecoming parade. He was a lifetime follower of the Cleveland Indians baseball team and Iowa Hawkeyes. The last few years, his most enjoyment was from his friends, family and grandchildren.

He was preceded in death by his parents.

Don's family would like to thank the doctors, techs, nurses and secretaries at the Mason City Dialysis Center and Hospice of North Iowa for their great care and services

To order memorial trees or send flowers to the family in memory of Donald A. Hoppel, please visit our flower store.
Send a Sympathy Card