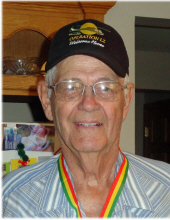 Funeral services will be held 10:30 A.M., Friday, December 11th at First Presbyterian Church in Woden with Rev. Dr. Glenn Wilson officiating. Burial will be in Bingham Township Cemetery in Woden with military rites by the Woden Veterans Ceremonial Unit.

Visitation will be held from 4 to 7 P.M., Thursday at the Cataldo Funeral Home in Woden and will continue one hour prior to services at the church.

Donald Henry Isebrand, the son of Henry and Christena (Dirksen) Isebrand, was born December 20, 1938 on a farm in Grant Township, Winnebago County. He graduated from Woden High School in 1957. After high school, Don worked for his father at the hardware store in Woden. On July 11, 1959 he married the love of his life, LaVonne Wood at the Methodist Church in Woden. Don served his country in the U.S. Army from 1961 to 1963 being stationed in Fort Belvoir, VA and Seoul, Korea. Following his honorable discharge, he returned to Woden. After his father passed away in 1977, he purchased the hardware business which he operated until retiring in September of 2015. He enjoyed spending time with his family and his grandkids. He enjoyed many hobbies including trapshooting, fishing, and in his earlier years bowling. However his favorite was trapshooting. Don shot his first registered targets in 1962 and ran “100 straight” that same year (a feat many shooters do not accomplish in their entire career). He won many trophies, but one of his proudest was finishing 2nd to hall of fame shooter Bob Allen, losing only by one bird in the 1963 Iowa State Shoot “High over all” program. Don and his family always looked forward to the annual “up north” fishing trip with the Wood family and friends which began in 1972.

He was a member of First Presbyterian Church in Woden where he served as an Elder and was on the Session. Don was also a member of the Woden American Legion, National Rifle Association, Woden Fire Department, Ventura and Titonka Gun Clubs and served on the Woden City Council and Hancock County Sheriff Reserves for over 20 years.

He was preceded in death by his wife, LaVonne, Jan. 7, 2006; his parents; and a sister, Wilma Isebrand.
To order memorial trees or send flowers to the family in memory of Donald H. Isebrand, please visit our flower store.
Send a Sympathy Card