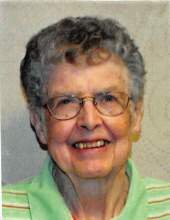 KLEMME - Donna J. Hopley, 83, of Klemme died Saturday, December 3, 2016 at the Rehabilitation Center of Belmond with her daughters Coleen and Wendy by her side.

Funeral services will be held 2 P.M., Thursday, December 8th at the Cataldo Funeral Chapel, 160 E. 4th St, in Garner with Mike Thompson officiating. Burial will be in Concord Township Cemetery in Garner.

Donna June Stevens, the daughter of Hattie (Everhart) and Lloyd Stevens, was born June 20th 1933 in Swaledale, Iowa. Donna graduated from Swaledale High School, class of 1950, where she was an avid basketball player, and was crowned "Miss Swaledale"1950, which earned her a long ride down Federal Avenue during the North Iowa Band Festival parade. Donna met Bill Hopley of Thornton while in high school, and after her high school graduation in May 1950, married Bill on June 18, 1950 at the Thornton Methodist Church. Donna and Bill farmed west of Thornton before moving to Clear Lake and eventually Garner where they would spend many years, while Bill owned and operated “Bill’s Barber Shop” and Donna worked for Marv Schoneman at the Super Value grocery store. At the age of 42 Donna took a bold step and entered the NIACC nursing program, graduating in 1974. Donna began and ended her nursing career at Concord Care Center in Garner, and for over 20 years worked with the some of the finest nurses in Garner; Vivian Bovenmeyer, Wanda Wold, Lavonne Lemke, and medical director Lyle Fuller, M.D. Upon retirement, Donna and Bill began country life at their acreage east of Klemme for over 30 years. Donna thoroughly enjoyed raising her 100 laying hens and selling her eggs, gardening and canning, and even selling night crawlers and minnows at the family owned Thompson and Hopley bait shop for many years where she became affectionately known as the "worm lady.” Donna was a good cook and hosted many family gatherings where she could spend time with her family. Donna had a tender spot for her farm animals. Their milking cows, Daisy and Olympia; dogs, Toby, Rusty, Duke, Drake, Belle and Ginger; kittens, Shaggy, Tuffy, and so many more furry friends, too numerous to mention. Donna was a quiet and gentle lady that preferred the simple pleasures of life. She was an avid Hawkeye basketball fan and enjoyed spending time with her children and grandchildren.

Donna will be forever missed by her two daughters, Coleen Rosendahl (special friend Tim Palmer), and Wendy (Bill) Thompson, both of Klemme that still reside on the Hopley acreage east of Klemme; her four grandchildren: including, Michael (Celina) Thompson and daughter, Quinn Noelle of Clarion, Matthew (Sara) Thompson and children, Claire and Grant, Melissa (special friend, Jamy Zinke) and daughters, Ashlee, Alexis, and Allison of Scarville; Donna was a great grandma to eight and a great-great grandma to one. She is also survived by a sister, Delores Frohling of Meservey; brother-in- law, Fred Flores of Mason City; sister-in-law, Mary (Jim) Jackson of Rockwell; brother-in-law, Douglas (Regina) Hopley of California; and numerous nieces and nephews.

Donna was preceded in death by her husband of 62 years Bill; parents, Lloyd and Hattie Stevens; parents-in-law, Joe and Esther Hopley; sisters, Doris Flores and Dorothy Walrod; sister and brother- in-law, Bonnie and Clarence Christians; brothers-in-law Merle Frohling and Laurence Walrod; and beloved niece, Debbie Jackson who left us all to soon.

The family wishes to extend their heartfelt thanks to the entire staff of the Rehabilitation Center of Belmond for their loving care the last two years and to Joleen of Gateway Hospice, Clarion, for her caring guidance these last few difficult weeks.

Memorials for Donna can be made to her daughter, Wendy Thompson, 2120 170th St. Klemme, Iowa, 50449, and on-line condolences at Cataldo Funeral Home in Garner.
To send flowers to the family in memory of Donna J. Hopley, please visit our flower store.