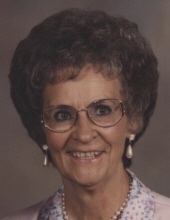 A visitation will be held one hour prior to the funeral service at the church on Wednesday.

Burial will be held at Forest Home Cemetery in Leland.

In lieu of flowers, memorials may be directed to the Our Savior’s Lutheran Church.

Donna June Kramer was born to Cooney and Sena (Tjaden) Kramer in rural Woden, Iowa on June 10, 1935. She grew up in rural Woden with her five brothers and sisters.
Donna attended school at Bingham Township # 6 and graduated from Woden High School in 1952. She then continued her education at Waldorf College in Forest City.

On February 28, 1955 she married the love of her life, Richard Walter Olson at the 1st Presbyterian Church in Woden, Iowa. They recently celebrated their 63rd wedding anniversary together. They had three daughters Dian, Cynthia and Susan.

Donna worked caring for others as a Nurse’s aide at the Forest City Community Hospital. She then continued her service as a First Aid and CPR instructor for the American Red Cross.

Donna served as a volunteer for the Forest City Ambulance Service and was an
Emergency Medical Technician. During her more than 10 year as a volunteer she served as president of the Ambulance service for multiple terms. Donna then spent twenty years working in the cabinet shop at Winnebago Industries before retiring in 1995.

Donna and Richard joined Our Saviors Lutheran Church in Leland where she was part of the Ester Circle and served on the church council.

Donna loved spending time with friends, tending to her garden and planting flowers. When she wasn’t outside you could find her in the kitchen baking her favorite desserts. She also enjoyed playing the piano and singing, as well as playing cards, she was particularly fond of beating her husband at cribbage.

After retiring from Winnebago, Donna lead a relaxing life spending time and traveling with her husband Richard, to visit her daughters Dian in Boston and Susan along with her husband Mark, and granddaughters Alyssa and McKenzie in Denver. Richard and Donna were able to spend their winters in Mission, Texas where she was a member of the choir.

She was preceded in death by her daughter, Cynthia Ann; her parents, Sena and Cooney; her sister, RuthAnn and her brothers, Charles and Donald.
To order memorial trees or send flowers to the family in memory of Donna J. Olson, please visit our flower store.
Send a Sympathy Card