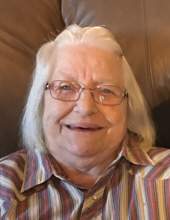 Visitation will be held from 9 A.M. until service time at the church on Monday. Cataldo Funeral Home is in charge of arrangements.

Donna Lee Swalve, the daughter of Leroy and Virginia (Larson) Adams, was born January 5, 1938 in Albert Lea, MN. At an early age, she moved with her family to Thompson where she graduated from high school in 1957. On October 28, 1961, she was married to Lewis Swalve at First Reformed Church in Buffalo Center. They lived in the Garner and Hayfield areas for most of their married life. Donna was employed as a cook at Mitz and Bertha’s Truck Stop in Leland, Big Oak Café in Forest City and the Garner VFW. She also worked in Forest City at Winnebago’s Stitchcraft and was a nurses’ aide at several nursing homes including Concord Care Center in Garner. She enjoyed cooking, canning, embroidering and crocheting.

She was a member of First Reformed Church in Buffalo Center and was a past member of the United Methodist Church in Thompson where she taught Sunday school.

She was preceded in death by her parents; a son, Kevin Swalve; a daughter, Gail Swalve Potter; granddaughter, Jasmine Ouderkerk; an infant brother, Devere Adams; parents-in-law, George and Gesina Swalve; a sister-in-law, Thelma Adams; and a brother-in-law, Allan Swalve.
To order memorial trees or send flowers to the family in memory of Donna L. Swalve, please visit our flower store.