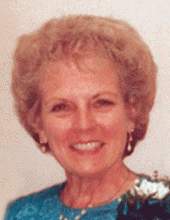 Funeral services will be held 10:30 A.M., Thursday, August 28th at the United Methodist Church in Garner with Rev. Paul Evans officiating. Burial will be in Concord Township Cemetery.

Donna Marie Mack, the daughter of George and Zella (Kellogg) Messersmith, was born November 11, 1926 in Charles City. She was baptized at the United Methodist Church in Charles City. Donna attended Charles City High School where she was crowned Charles City High School's first Homecoming Queen. She graduated from high school in 1943 and attended the University of Dubuque for her pre-cadet nurses training. She took her nurses training at Finley Hospital in the Navy Cadet Nurses program. After her discharge, she returned to Charles City where she worked at the Cedar Valley Hospital, and for Dr. F.H. Fillenwarth. In 1948, she was united in marriage to Robert A. Smith, who was part owner of the Rexall Drug Store. They lived in Charles City until he took a job with Hewitt Wholesale, and they moved to Spencer. While in Spencer, Donna was the Executive Director of a tri-county Red Cross. She coached the Spencer city girl's swim team, the inter-mural girls' softball team and was a Brownie Scout Leader. She also was active in Spencer Entertainment plays, having the lead in, "Pajama Game", "Guys and Dolls", and "Call Me Madam". Donna was president of North School P.T.A. and served on the Y.W.C.A. board. The family later moved to Clear Lake where her husband was transferred. Donna worked as receptionist-bookkeeper at the district C.F.S. office until she decided she would like to go to school in Ames and take a course in dog grooming. They bought an acreage where she started her grooming and kennel operation, "Donna's Doggie Doll-up". She was the Mother Advisor of Rainbow for Girls, for which she was presented the, "Grand Cross of Color". She was married to Dr. W.J. Mack in 1972. They made their home in Garner. Donna loved music, dogs and children. She sang with the Bel Canto singers in Charles City. In Garner she and three other women started a Sweet Adeline quartet, "The Out-of-Towners". From this quartet the North Iowa Chapter of Sweet Adelines evolved. She was a Big Sister, and a Play Lady at Mercy Hospital, reading to children whose parents could not be with them. Donna also read to the Head Start children, and to the children at the Library on Saturday mornings.

She was a member of the United Methodist Church in Garner where she taught Bible school, Sunday school, helped with the music for God's Squad and was active in the choirs of the church. Donna also sang with her husband's band, "El Doco's Banditos". She was on the Prairie View Advisory Board and the Care and Review board at Duncan Heights Care Facility. Donna was presented with the Outstanding Citizen Award by the Garner Jaycees and received awards for being a Hospice Volunteer and for organizing the Road to Recovery program in Garner. She also was presented a certificate of honor from the Garner school for helping the students in their reading classes.

She was preceded in death by her parents; both husbands, Robert Smith and Dr. W.J. Mack; a son, Scott Smith; a son-in-law, Greg Ethington; a brother, Eugene Messersmith; and her beloved poodle, Monique.
To order memorial trees or send flowers to the family in memory of Donna M. Mack, please visit our flower store.