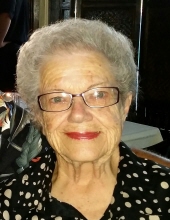 GARNER - Doreen L. Johnson, 78, passed to her eternal rest in the Lord on May 10, 2016, at the Brookdale Chandler Regional, Senior Living Community, Chandler, AZ, where she had been a resident since 2015.

Memorial services will be held 10:30 A.M., Saturday, August 27th at the United Methodist Church in Garner with Rev. Paul Evans officiating. Inurnment will be in Memorial Park Cemetery in Mason City.

Visitation will be held from 5 to 7 P.M., Friday, August 26th at the Cataldo Funeral Chapel in Garner.

Doreen Lea (Lackore) Johnson was born January 29, 1938, in Hampton, Iowa, the daughter of Clark P. and Floy E. (Schramm) Lackore. She grew up on her family’s farm southeast of Garner, Iowa, and attended Ventura Community Schools, graduating in 1956. She was a very active and accomplished student musician and athlete, playing the coronet, trumpet, baritone, and French horn in band, also singing in and accompanying the choir on piano; while she also played and excelled in girls’ sports, including basketball, track, and softball. Additionally, while growing up, she was also a strong Hancock County North Ell Tip-Toppers’ 4 H Member. Doreen’s musicianship led to several scholarship offers from prestigious programs. But she also had other interests, and after high school attended Hamilton Business College in Mason City, graduating with a medical assistant degree that she took to her first position with the Offices of Drs. Morgan, Morgon & Utney, radiologists and pathologists, where she worked until getting married.

On September 12, 1959, she married Richard Wendell (Dick) Johnson from Kanawha, IA, at the Clear Lake United Methodist Church, and they began farming northwest of Kanawha, raising two daughters, Rachelle and Raleene. Doreen was a dutiful farm wife – helping with the field work and livestock, including a large flock of chickens for production of hatching eggs. She was an excellent homemaker and served up countless numbers of delicious meals to both her family and the hay-baling and corn-shelling crews when they came to work. During their time on the farm, Doreen continued to stay active in 4-H, coaching many girls’ demonstration teams for the fair before her own girls were members, then when they were, taking her turn serving as a leader for the Amsterdam Pacemakers. She was also active in Farm Bureau and helped Dick with his service on the Hancock County Beef and Pork Boards. She and Dick were co-chairs of the pageant committee of Kanawha’s 75th Diamond Jubilee Celebration in July 1974. In 1975, Doreen became the medical assistant for Dr. L. W. Eller in Kanawha, where she worked for three years and thoroughly enjoyed returning to the medical field and assisting both the doctor and his patients. The family moved from Kanawha to an acreage southeast of Garner in June 1976 where they continued to farm 80 acres and raise livestock. She worked in the Hancock County Assessor’s Office from 1978-1979. Then in 1980 became a substitute U.S. Mail Rural Carrier, working all four routes around the Garner-Britt-Klemme-Ventura areas, and going full-time in 1997 where she continued until retiring in 2005. Route families, including their dogs, would often get a treat when Doreen delivered the daily mail.

While her vocation was medical assistant and farm wife, in which she excelled—her beloved avocation was music, and it was everywhere in her life. She was a church organist for the Kanawha and Garner United Methodist Churches, and also Wesley United Methodist in Mason City for a total of some 50 years, playing for thousands of regular Sunday services, special services and events, wedding showers, weddings, and funerals. She also directed church choirs, and herself sang solos, in duets, trios, and quartets, for many occasions. She taught piano lessons in both Kanawha and Garner for several years and also helped dozens of both Kanawha and Garner-Hayfield High School Small Group Music Contestants with her expertise and piano accompaniment of their performances, resulting in many “1” ratings. After her girls were gone from home, she also lent her musical talent to North Iowa theater groups and chorales, and for several years was delighted to participate in North Iowa’s “Tuba Christmas” at Southbridge Mall.

Generously interspersed amongst this full life were many good times with family and friends, fun (often fast) trips to Minneapolis to a Twins Game or the Ice Follies, to Des Moines for the State Fair, even Branson, MO, to see Andy Williams. She was very proud of her girls and their families. When she was able, she also greatly enjoyed playing cards, games, bowling, even snowmobiling back in the day.

In June 2012, Dick and Doreen relocated to Sun Lakes, AZ, to be closer to their daughters and following her illness, moved to the Brookdale Chandler Regional, Senior Living Community in Chandler in early 2015, where she resided until her death.

She was preceded in death by her parents, Clark and Floy Lackore, brother Doran Lackore and his wife, Betty, in-laws Wendell and Ann Johnson, and nephew Wayne Johnson.
To order memorial trees or send flowers to the family in memory of Doreen Johnson, please visit our flower store.
Send a Sympathy Card