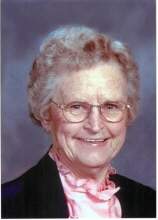 Visitation will be held from 5:00 - 7:00 P.M. Friday at Petersen Lund Funeral Home, 505 North Clark St and will continue on hour prior to services at the church.

Memorials may be directed to Mayo Clinic Hospice of Austin, MN.

Doris Mae (Hall) Thompson, the daughter of Ben and Julia (Petersen) Hall was born on October 2, 1923 in Jewell, Iowa. She was the second daughter and the youngest of seven children. She moved to Hanlontown as a small child and attended her early years of elementary school there. Doris graduated from Forest City High School in 1940 and worked in the Forest City Bakery for two years before marrying LeRoy Thompson on February 28th of 1942. LeRoy and Doris were blessed with over 71 years of marriage together.

LeRoy and Doris farmed together in Leland, Crystal Lake, and Forest City, before settling on a farm four miles west of Leland in 1952. They lived there for 30 years before retiring in 1982. They then moved to an acreage two miles outside of Forest City where they enjoyed another 30 years together. In their retired years they enjoyed camping and they spent their winters in south Texas.

Doris was a devoted wife and dedicated homemaker and was well known for her delicious baking and home cooked meals. She was a dedicated & faithful helpmate as she assisted in many of the farming duties alongside LeRoy. Doris enjoyed gardening, canning, and delighted in entertaining family and friends in her home. Doris volunteered as a 4-H leader, Awana club leader, and faithfully served in several additional ministry roles at Calvary Baptist Church in Forest City, Iowa.

Serving was God's gift to her and she lived it out daily as she loved and served those around her including her family, church, and community. The joy of Doris's life was her family. LeRoy and Doris have four children, Duane of Ankeny, Iowa and his children, Denise (Craig), Dan; Sandra of Phoenix, Arizona and her children, Christie (Jason), Steven (Lauren); Tom and wife Becki of Forest City, Iowa and their children, Scott (Tisha), Seth (Josi), Shaun (Emily); and Patti and husband Tom of Port Orange, Florida and their children, Tom Jr., Katherine (Tim). They also have twenty great-grandchildren including three on the way: Matthew, Lauren, Emma, Evan, Justin, Jason Jr., Isaac, Ian, Isabella, Lee, Miread, Noel, Olivia, Jessalyn, Jorgia, Ezra, and Jericho.

Doris was preceded in death by her parents Ben and Julia, siblings Melvin, Bueford, Elmer, Sylvia, Gordon and Ben.

To send flowers to the family in memory of Doris M. Thompson, please visit our flower store.