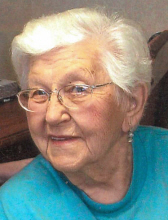 Funeral service will be held 10:30 A.M., Saturday, May 3rd at the United Methodist Church in Klemme with Rev. Michael Shaffer officiating. Burial will be in Ell Township Cemetery in Klemme.

Visitation will be held from 5 to 7 P.M., Friday at the Cataldo Funeral Chapel, 160 E. 4th St., in Garner with an American Legion Auxiliary service at 5 P.M. Visitation will continue one hour prior to services at the church.

Memorials may be directed to Klemme United Methodist Church, Hospice of North Iowa or charity of choice.

Doris Valera Groesbeck, the daughter of Emil and Anna (Schoenwetter) Pringnitz, was born November 12, 1920 on the family farm west of Klemme. She attended country school near her home and graduated from Garner High School in 1937. Doris continued her education at Iowa State Teacher's College where she received her teaching certificate. She then taught in the rural schools of Hancock County for a few years. On June 27, 1946 she was married to Buzz (Mervin) Groesbeck at Liberty Methodist Church west of Klemme. They made their home east of Klemme where they farmed and raised their family. In 1983, they retired from farming and moved into Garner. After Buzz passed away she moved to Prairie View Apartments in Garner until 2008 when she became a resident of Concord Care Center. Doris enjoyed her family, gardening, baking, Bible studies, refinishing furniture, square dancing and camping.

She was a member of the United Methodist Church in Klemme, UMW, Klemme American Legion Auxiliary, ODO Club and was a past 4-H leader.

She was preceded in death by her parents; husband, Buzz, Nov. 15, 2001; a daughter, Linda in 1969; sisters, Verna Ott, Lois Lange and Merlin Mau; and brothers, Jr. "Dutch" Pringnitz and Virgil Pringnitz.

To order memorial trees or send flowers to the family in memory of Doris V. Groesbeck, please visit our flower store.
Send a Sympathy Card