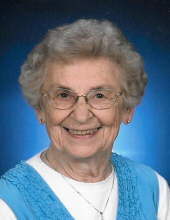 Dorothy Barbara Brcka, the daughter of Anton and Emma (Houdek) Brcka, was born on a farm in Garfield Township, Hancock County on December 4, 1918. She attended Garfield #8 country school through the 8th grade. Dorothy then helped her father take care of her younger brother and sister and with work on the farm. On September 12, 1938 she married Rudy Urich at the St. Wenceslaus Catholic Church in Duncan. They made their home on his parent’s farm northwest of Garner. Rudy and Dorothy moved off of the farm after 62 years to a new home in Garner in 2001. They enjoyed traveling abroad visiting Russia and many European countries including Italy and Switzerland. They also took a cruise on the Mediterranean Sea and visited Alaska and the Hawaiian Islands. Dorothy enjoyed square dancing, baking, gardening, sewing, making over 100 quilt tops for the missions, and volunteering at Concord Care Center for many years.

She was a member of St. Wenceslaus Catholic Church, Rosary Society, Catholic Workman FCSLA w51 and was an honorary member of the Duncan Rosary Society. She also belonged to the Garfield Hobby Club and Birthday Club.

Dorothy is survived by her children, Roger Urich of Garner, Robert (Billie) Urich of Oro Valley, AZ and Carmen Urich of Fort Collins, CO; and four grandchildren and their families, Mike (Jill) Urich and their daughter, Melody, Matthew (Shirley) Urich and their two children, Mollie and Jayden, Jennifer Freeman and her three children, Zachary, Sara and Seth and Julie Urich.

She was preceded in death by her mother, Emma in 1926; her father, Anton in 1962; husband, Rudy in 2009; son, Gerald in 2013; a sister, Blanche Brcka; and a brother, Arnold Brcka.
To order memorial trees or send flowers to the family in memory of Dorothy B. Urich, please visit our flower store.
Send a Sympathy Card