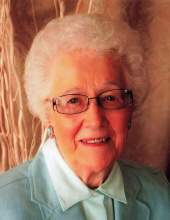 Visitation will be held from 5 to 7 p.m., Friday at St. Boniface Catholic Church with a Catholic Daughters of the Americas rosary at 4:30 p.m. and a Scriptural wake service at 7 p.m. Visitation will continue one hour prior to services at the church on Saturday.

In lieu of flowers, memorials may be directed to St. Boniface Catholic Church, ALS Research, Gateway Hospice or the Alzheimer’s Association in memory of Dorothy.

Dorothy Gertrude Huinker, the daughter of Joseph and Rose (Klesel) Young, was born November 27, 1929 on a farm west of Garner. She attended country school and graduated from Garner High School. After high school, she worked at Hancock County National Bank in Garner. On June 6, 1950, she was married to Alvin Huinker at St. Boniface Catholic Church in Garner. They were blessed with seven wonderful children. Dorothy loved being at home to raise the children but due to Al’s ill health with multiple sclerosis in 1974 she accepted a secretarial job with the Garner-Hayfield Community School district. She was employed at the school for 20 years until retiring on December 31, 1994. In her retirement, she enjoyed spending time with her family, quilting and walking. She took real pride in her home, her family, her flower gardens and being outdoors.

She was a member of St. Boniface Catholic Church, Rosary Society, Catholic Daughters of the Americas, the Archdiocesan Council of Catholic Women, Garfield Hobby Club and several card clubs.

To send flowers to the family in memory of Dorothy G. Huinker, please visit our flower store.