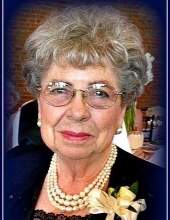 Funeral services will be held at 1:30 P.M. on Monday, March 28, 2016 at Calvary Baptist Church in Forest City with the Rev. Doug Farrell officiating. Burial will be in Oakland Cemetery immediately following the service.

Visitation will be held Sunday, March 27 from 5:30 to 8 P.M. at the Cataldo Schott Funeral Home in Forest City and will continue from 1 – 1:30 P.M. prior to the service at the Church.

Dorothy, the daughter of Irvin and Grace (Robinson) Krieger was born in Woden, Iowa on March 20, 1930. Her mother Grace passed away in 1935 when she was five years of age. Her father then was remarried to Blanche Peters in 1939 when Dorothy was 9 years old. She attended and graduated from Thompson High School in 1948. She served as Senior Class President and actively participated in the Glee Club, Band, Mixed Chorus, Class Plays, Pep Club, Cub Staff, and was a Cheerleader. During High School she also worked as a Nanny and a Switchboard Operator.

Following graduation she attended the University of Northern Iowa and graduated with a Teaching Degree. She then taught Country School in Linden Township, grades 1-8. Dorothy accepted the Lord as her personal Savior and later attended the Grand Rapids Baptist Bible College in Grand Rapids, Michigan. She married Marvin Dean Anderson on December 30, 1950 and they were married for 62 years. She and Marvin were active members of the Calvary Baptist Church for most of their lives. She was a beautiful, dedicated, humble wife and mother. She and Marvin farmed his father’s family farm located west of Forest City for 50+ years.

She is preceded in death by her beloved husband, Marvin; her parents, grandparents, great grandparents and her brother Irvin Dean Krieger.
To send flowers to the family in memory of Dorothy J. Anderson, please visit our flower store.