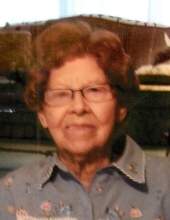 Funeral services will be held 11:00 A.M., Monday, September 29, 2014 at the Cataldo Funeral Chapel in Garner with Rev. Robert Snitzer officiating. Burial will be in Crystal Township Cemetery in Crystal Lake.

Visitation will be held from 5 to 7 P.M., Sunday at the Cataldo Funeral Chapel in Garner and will continue on hour prior to services at the chapel.

Dorothy Mae Wilson, the daughter of Lewis and Hannah (Jefson) Hanson, was born December 10, 1917 on a farm north of Miller. She attended the rural schools of Madison Township in Hancock County until the eighth grade. On March 8, 1935 she was married to Forest R. Wilson in Bethany, Missouri. They lived in Crystal Lake where their raised their family. Dorothy worked at Winnebago Industries, Stitchcraft plant, for over twenty years, retiring in 1971. She and Forest wintered in Texas and Arizona in their retirement years. After Forest passed away in 1993, she continued to live in Crystal Lake until moving to Garner in 2004. She enjoyed cooking, canning and was an immaculate house keeper.

She was a member of Calvary Lutheran Church in Crystal Lake.