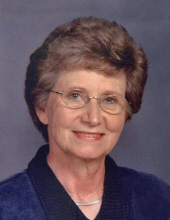 Funeral services will be held 10:30 Saturday July 18, 2015 at St. John’s Lutheran Church in Woden with Rev. S. Kim and Trudy Peterson officiating. Burial will be in Grant Township Cemetery near Woden.

Visitation will be held 5 to 7 Friday at the Cataldo Funeral Chapel, 310 Main Street, in Woden and will continue one hour prior to services at the church.

Doryce Elaine Hanna, the daughter of Edmund and Mildred (King) Sorenson, was born May 31, 1936 in Forest City. She attended Crystal Lake High School graduating in 1953. On April 14, 1955 Doryce married Bruce Hanna at the United Methodist Church in Crystal Lake. The couple lived in Maryland for a few years while Bruce served in the U.S. Army outside of Washington, D.C. In 1957, they returned to Woden where they farmed and raised their family. In 1991, they moved from the farm into Woden. Doryce enjoyed spending time with her family, wintering in Mission, TX with Bruce, watching her grandchildren’s sporting events, going for walks, and singing in the Hancock County Choir. She will be dearly missed by all those who knew and loved her.

She was preceded in death by her parents; husband, Bruce, June 5, 2001; an infant daughter Tresa; and sister, Marvella Holtorf.
To order memorial trees or send flowers to the family in memory of Doryce E. Hanna, please visit our flower store.
Send a Sympathy Card