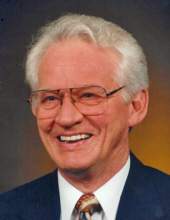 A private family service including military honors will be held preceding his burial in the Evergreen Cemetery, Britt, IA, at a later date. In lieu of flowers, memorials may be sent to The Glenn Senior Community or St. Croix Hospice.

Cataldo Funeral Home in Britt is in charge of arrangements.

Born March 11, 1926 in Monticello, IA to Hans and Lena (Schrader) Petersen. Marv graduated from Mechanicsville High School, Mechanicsville, IA in May 1944. He entered the United States Navy following graduation and served his country as a Gunner’s Mate in the South Pacific during World War II.

He married the love of his life, Dorothy Sylvia Emrich of Tipton, IA on June 1, 1947 at the First Presbyterian Church in Mechanicsville, IA. Marv attended Coe College in Cedar Rapids, IA and graduated with his Doctor of Chiropractic degree from Lincoln Chiropractic College in Indianapolis, IN, 1951. Following graduation he and Dottie moved to Britt, IA where he started his Chiropractic practice on January 14, 1952. Their marriage was blessed with daughters, Elizabeth and Julia. Family time was treasured and many happy years were spent together with his wife, daughters, two sons-in-law, four grandsons, and a newly-born great grandson.

During their years in Britt an important part of his life was his participation with the Britt Congregational United Church of Christ where he was a faithful member and actively involved as a Deacon and a Trustee. He also enjoyed community involvement by serving on the BIDCO Board (Britt Industrial Development Corporation), the Library Board, and the Britt Country Club Board. Sports were a passion throughout his life and he participated in basketball, track, baseball/softball, fishing and golf. He also spent many hours dedicated to his favorite hobbies of woodworking and remodeling projects.

After a successful 37 year practice he retired in 1989. Marv and Dottie later moved to Bella Vista, Arkansas. Their retirement years were spent enjoying family, friends, traveling, card clubs, golf, church activities and volunteering for various charities. Their home for the past 1-1/2 years has been The Glenn Assisted Living/Senior Community, 5300 Woodhill Road, #229, Minnetonka, MN 55345 where they have made many new friends and appreciated the wonderful staff.

Marv is survived by his wife of 68 years, Dorothy S. Petersen; daughter, Elizabeth (Jeff) Stevenson of Atlanta, Georgia and their two sons, Mathew and Eric Stevenson of Panama City Beach, Florida; daughter, Julia (Kevin) Prohaska of Excelsior, Minnesota and their two sons, Zachary (Suzanne) Prohaska and their son, Noah, of Cupertino, California and Jordan Prohaska of Chicago, Illinois; sisters-in-law, Mildred Petersen of Enterprise, Alabama and Betty Emrich of Tipton, Iowa; and many nieces and nephews.

Marv was preceded in death by his parents; two brothers; and three sisters.
To send flowers to the family in memory of Dr. Marvin H. Petersen, please visit our flower store.