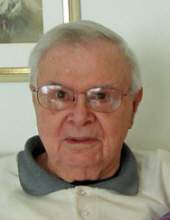 Funeral services will be held 2 P.M., Tuesday, May 3rd at the Cataldo Funeral Chapel, 160 E. 4th St. in Garner. Private family burial will be in Concord Township Cemetery in Garner.

Dwayne was born on a farm just north of Garner in 1921, the second son of Danish immigrant parents, Christian and Mary (Jensen) Rasmussen. He attended Forest City Schools and Waldorf College. In his youth, he played basketball and football, and throughout his life he enjoyed family activities, golfing with his sons, his daughters’ careers in the health professions, bowling, and fishing. Dwayne and his father bought a farm near Miller where he and the girl next door fell in love. In 1958, he and Vivian Hanson married at the Little Brown Church in Nashua. They busied themselves with farming, gardening, and raising their family. in this idyllic setting. Vivian loved watching musicals during the 50s and 60s, but the only one Dwayne liked was “Oklahoma.”

He strove to develop greater efficiencies in farming operations and to operate in harmony with nature. In 1967, he learned of Iowa State University research and became one of the first North Iowa farmers to transition to modern hog confinement operations. He grew just the right balance of corn, soybeans, and hay on 160 acres to produce 800 pigs each year for American consumers. Farmers from as far away as North Carolina visited Iowa during the 1970s, including his farm, to learn this more efficient way of producing pork. His family remembers Dwayne providing them the right balance of farm work, family time, church activities at Miller Faith Lutheran, golf, and school sports to bless them with this idyllic life.

Always the innovator, he built his own satellite dish in the early 1980s to receive more television stations and was interviewed by the local KGLO television studio. After retiring from farming, he enjoyed travels with Vivian to Arizona and Texas during the winter to visit relatives; and travels to Denmark, Germany, and Alaska. Through his 80’s he kept a large garden in Clear Lake, bicycled frequently to Garner, golfed, and fished on Clear Lake. He built a retaining wall at age 88, operated his own snow blower until age 90, and his iPad until 93. He often credited home grown food, Vivian’s cooking, and his late life hobby on nutrition to his longevity. He reached his goal of 95 good years with the loving assistance of the Oakwood Care Center Staff.

He was a member of Zion Lutheran Church in Clear Lake.

He was preceded in death by his parents; and brother, Robert Rasmussen.
To send flowers to the family in memory of Dwayne Rasmussen, please visit our flower store.