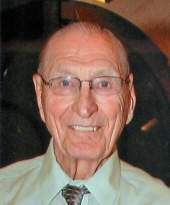 Funeral services will be held 10:30 A.M., Monday, June 23rd at St. Boniface Catholic Church in Garner with Fr. Dennis Miller officiating. Burial will be in the church cemetery.

Visitation will be held from 5 to 7 P.M., Sunday at St. Boniface Catholic Church in Garner with a Knights of Columbus rosary at 6:45 P.M. followed by a Scriptural wake service. Visitation will continue one hour prior to services at the church.

Earl Anthony Erdmann, the son of Anthony Erdmann and Regina Bleich was born August 21, 1923 on a farm east of Wesley in Hancock County. At any early age, he moved with his mother to Garner and was adopted by his step-father, William Houdek. Earl graduated from Garner High School in 1940. From 1940 to 1943 he was employed in Garner at Roe's Grocery Store, Charlie Schisel's Dry Good and Grocery and Hancock County National Bank. On August 25, 1943 he married Marcella Nedved at St. Wenceslaus Catholic Church in Duncan. The following day Earl received an acceptance letter to join the Federal Bureau of Investigation. He accepted and moved with Marcella to Washington, D.C., where he was employed in the clerical department for the FBI. To advance his career, he worked during the day and attended college at night for three years and graduated with bachelor's degree in commercial science in June of 1948. He then received an appointment to be a special agent for the FBI. Earl took a fourteen week training course at Quantico Marine Base in Virginia to complete his training. Once completed he was a assigned to St. Louis, MO for three months before moving to Gary, IN where he commuted to a resident FBI agency with headquarters in Indianapolis, IN. For the next eighteen months, Earl was on constant travel status. In 1953, he was transferred to Omaha, NE at which time he decided to move his wife and children to Garner. In 1954, he left the FBI and returned to his family in Garner. Earl put his accounting experience to work and opened up a bookkeeping business in Garner. He later accepted a position at Water Tower Paint and Repair in Clear Lake. Earl became a part owner in the business and continued to work for the company until his retirement in 1989. From 1997 to 2007 he worked for the FBI as a consultant in special cases. Earl enjoyed music and was a drummer for Malek Fisherman in the early 1940's until he accepted a position with the government. Later on, in his retirement, he rejoined the band.

He was a member of St. Boniface Catholic Church and the Msgr. Dougherty Assembly of the Knights of Columbus where he served in various positions.

To send flowers to the family in memory of Earl A. Erdmann, please visit our flower store.