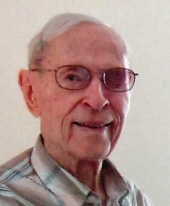 Funeral services will be held 10:30 A.M., Wednesday, February 19th at the United Methodist Church in Britt with Rev. Robert Dodge officiating. Burial will be in Evergreen Cemetery.

Visitation will be held from 5 to 7 P.M., Tuesday at the Cataldo Funeral Home in Britt and will continue one hour prior to services at the church.

Earl William Schulz, the son of George and Athalja (Horn) Schulz, was born August 24, 1922 at Pontiac, IL. At the age of 13 he moved with his parents to a farm north of Britt. Earl attended country school near his home and graduated from Britt High School in 1940. He served his country during WW II in the U.S. Army, seeing action in the European Theatre. On July 25, 1944 he married Doris Fox at her parent's home north of Britt while he was home on furlough. Following his honorable discharge in 1945, he returned home to his wife, Doris and they farmed south of Britt where they raised their three children. In 1988 they retired and moved into Britt. He enjoyed fishing, traveling, wintering in Texas, feeding cattle and vacationing with family.

He was preceded in death by his parents; son-in-law, Ray Pringnitz; a stillborn grandson, Dan Pringnitz, in 1970; sisters-in-law, Imogene Schubert and Marjorie Snyder; and brothers-in-law, Richard Schubert, John Fox and Chris Schulz.

To order memorial trees or send flowers to the family in memory of Earl William Schulz, please visit our flower store.
Send a Sympathy Card