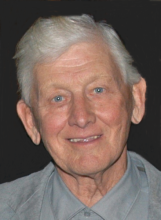 Visitation will be held from 4 to 7 PM, Sunday, July 28th at Waldorf College, Salveson Hall in Forest City and will continue one hour prior to services at the Atrium. Petersen Lund Funeral Home in Forest City is in charge of arrangements.

Edward was born on March 9, 1924, to Helmer and Hazel (Peterson) Branstad, and grew up on the farm that has been in his family for 130 years. Edward attended Our Savior's Lutheran Church in Leland, where he was confirmed. Upon graduation from Leland High School, Edward attended Waldorf College in Forest City. He then returned to his family farm with his wife, Rita, where they were both lifelong farmers. His sons recall that after the family would work the farm in a typical 14-hour day, Edward's regular comment when they walked in the house was, "We didn't get much done today. We will give it heck tomorrow." That work ethic was shown repeatedly. During the mid-century drought and farm crisis, Edward and Rita helped the farm survive by taking second jobs. Again, during the farm crisis of the 1980s, Edward took a second job working as the county Agricultural Stabilization and Conservation Service (ASCS) director. After leaving the office, he would return to the farm, often working until midnight. When Edward turned 70, he vowed to work no more than 10-hour days. He never met that goal. Friends and family note that Edward would help anyone. He would stop to help any stranded motorist. He mowed the neighbors' lawns and he took time to teach farmers how to be in ASCS compliance. As Edward entered his 80s, he found he was able to relax when he and Enolia traveled to Donna, Texas, where they spent their winters. His family notes, however, that when he returned most of his stories were about helping neighbors fix up their homes or about traveling to Mexico to do missionary work.

Edward was preceded in death by his wife of 44 years, Rita (Garland) Branstad.

Memorials may be made in Edward's name to American Cancer Society or to Hospice of North Iowa.

To order memorial trees or send flowers to the family in memory of Edward A. Branstad, please visit our flower store.
Send a Sympathy Card