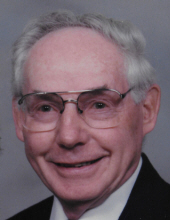 The family requests that in lieu of flowers, memorials may be directed to United Methodist Church Faith Village after school program.


Edward John Messer was born on June 23, 1919 in Dysart, IA to Earl and Annamae (Allison) Messer. He had two older brothers, Glenn and Leo and also a younger sister, Ann Dorothy who have preceded him in death. Ed delivered newspapers with his older brother, Glenn as young boys. He began working at A & G Pharmacy as a high school student in Eldora. His friends called him a “Soda Jerk” as a tease during his high school years. Ed graduated from Eldora High School in 1938, he was co-captain of his football team in High School and lettered in football. After high school, he entered the Army on Oct. 19, 1941. He served in the South Pacific during WW II and later received a Purple Heart award. He served as a secretary for his unit. Ed was married on March 19, 1945 to Verla Lavonne Van Patter at the United Methodist Church in Eldora while on furlough. He served another 6 months in the Army before being honorably discharged in 1945 following the ending of WWII. The couple honeymooned in St. Louis, MO following Ed’s discharge from the Army. Ed and Verla moved to Drake Trailer Park in Des Moines, IA and Ed enrolled in Drake University College of Pharmacy, in the fall of 1945. During his pharmacy student years, he worked at the East Side Drug in Des Moines. Ed graduated from Drake University College of Pharmacy on May 30, 1949. His first job as a pharmacist was at Marshall Drug in Hampton. He also worked in Radcliffe and at Judisch Brother’s Drug Store in Ames. He then returned to Hampton working at Marshall Drug before moving to Dows to work for a drug store on main street. In 1958, Ed moved to Forest City and began working at Pinckney Rexall Drug, where he worked until he bought the drug store from Lehman Pinckney. This is where his pharmacy career ended following a heart attack and stroke.

He was a member of the United Methodist Church and the Forest City American Legion. He made lots of wood things for the church, including first aid kits and for the kitchen.

He was preceded in death by his parents; brothers, Glenn and Leo Messer; and sister, Ann Dorothy Davis.
To order memorial trees or send flowers to the family in memory of Edward J. Messer, please visit our flower store.
Send a Sympathy Card