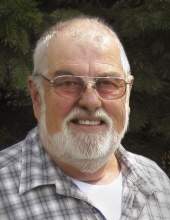 Funeral services will be held 10:30 A.M., Saturday, December 12th at St. James Catholic Church in Forest City with Fr. Jim Dubert officiating. Burial will be in the church cemetery.

Visitation will be held from 4 to 7 P.M., Friday at the Cataldo Schott Funeral Home, 505 N. Clark St., in Forest City and will continue one hour prior to services at the church.

Edward Joseph Reineke, the son of Anton and Loretta (Olberding) Reineke, was born July 29, 1942 in Randolph, NE. At any early age he moved with his family to Forest City where he attended school. Ed worked in construction for a few years before working in the sanitation department for the City of Forest City. On March 2, 1973 he married Susan Jones in Forest City. They made their home in Forest City where they raised their family. Ed worked at Winnebago Industries for thirty-eight years in the sidewall/roof department and also farmed west of Forest City for many years. For the past six years, Ed and Susan wintered in Mission, TX. Ed enjoyed spending time with his grandchildren, being outdoors, tinkering with small gas engines, collecting John Deere toy tractors and woodworking.

He was a member of St. James Catholic Church in Forest City.

He was preceded in death by his parents; and infant brother, Anton, Jr.; a step-son, Joel Haugen; and two sisters, Rosemary Reineke and Helen Reineke.
To order memorial trees or send flowers to the family in memory of Edward Joseph Reineke, please visit our flower store.