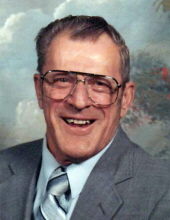 Funeral services will be held 1:30 P.M., Thursday, October 9, 2014 at St. Paul Lutheran Church in Garner with Rev. Scott Kozisek officiating. Burial will be in Concord Township Cemetery in Garner.

Visitation will be held from 4 to 6 P.M., Wednesday at the Cataldo Funeral Chapel, 160 E. 4th St., in Garner and will continue one hour prior to services at the funeral chapel.

Edward Junior Duregger, the son of Edward and Alice (Hoffman) Duregger, was born July 11, 1931 in Burchinal. He attended school in Indiana for a few years following the death of his mother. He later returned to Clear Lake and attended school through the eighth grade. On January 3, 1950 he married Geraldine (Chodur) Hart. On November 26, 1960 he married Sharon Lee Hall at Zion Lutheran Church in Clear Lake. They lived in Clear Lake until 1977 when they moved to Buffalo Center. In 1988, they moved to Garner where they lived south of town. Junior worked for E. L. Secory and for L. A. Fulton & Sons as a commercial plumber. He loved living on his acreage where he would sit outside in the sun watching the antics of newly born kittens. He loved to beat his children and grandchildren at a round of ‘500’.

He was a member of St. Paul Lutheran Church in Garner.