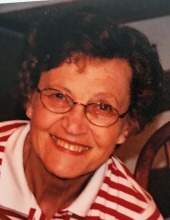 Memorial services will be held at 10:30 AM on Friday, August 11th at St. John’s Lutheran Church east of Garner with Rev. Carl Hedberg officiating. Inurnment will be at the church cemetery.

Memorials may be directed to St. John’s Lutheran Church or the Ventura Public Library.

Elaine Ollenburg, the daughter of Henry and Ida (Hanson) Lovick, was born May 3, 1932 on a farm near Joice. She was the 10th of 12 children. She was always very proud of her large family. Elaine attended country school and graduated from Fertile High School in 1949. Although unable to fulfill her own dream of college, she remained an avid reader for her whole life and ensured that all of her children obtained degrees. After high school, she worked at the Mason City Telephone Company. On November 28, 1951, she married Robert “Bob” Ollenburg at Fertile Lutheran Church. They farmed north of Clear Lake until 1960 when they moved to the acreage at St. John’s Corner, rural Ventura where they raised their five children. Elaine was a hard worker and she taught her children to enjoy and appreciate the satisfaction that goes with a job well done. For many years Elaine and her five children were the St. John’s Lutheran Church janitors. Elaine was a stay at home mom, but operated her own upholstery business from their home. After the purchase of Ollenburg Motors she took on the job of bookkeeper. Elaine’s skills with a sewing machine, paint brush and hammer were put to use decorating her home and all of her children’s homes. And she would tell you those kids moved a lot. She loved a project, shopping for a bargain, cooking, gardening, and spending time with family and friends. Elaine and Bob spent many memorable summers at their cottage in Clear Lake and their winter home in Mission, Texas.