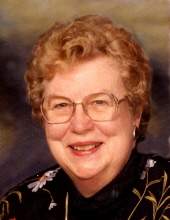 Visitation will be held one hour prior to the services at the church on Monday.

Burial will be held in the Roland, Iowa Cemetery.

After ninety-two years full of love, adventure, and music, Elaine Shirley Cole-Campney passed away peacefully, surrounded by family, at the Good Samaritan Center in Forest City, Iowa on January 5, 2020.

Elaine’s contagious smile would light up the room, her baking and hugs warmed many hearts, and all were freely shared. Throughout her life, Elaine traveled, crafted, fished, played accordion, and hosted numerous picnics; she was especially fond of Big Band dances, piano music, and Sousa Marches. Her beautiful soprano voice would ring true at church, and she could often be heard quietly singing while rocking a grand-baby. Elaine always said her family was “the most important thing I have”, and she took every opportunity to let them know. Her generous spirit and kind heart will be missed by many, along with the nuggets of wisdom she shared with those lucky enough to have known her. Like the tags on her countless crocheted masterpieces stated, her life was “Made with love”.

Elaine Shirley Johnson was born on August 7, 1927, the only child of Maude and Oscar Johnson. Her childhood in Orchard, Iowa was filled with fishing, roller and ice skating, and gatherings with friends and family. Elaine also played basketball at Orchard High School before graduating in 1944. She attended St. Olaf College, then transferred to Waldorf College and graduated in 1947.

While at Waldorf, Elaine met Joel Cole, whom she married on December 27, 1947. After beginning their life in Storm Lake, Iowa, they moved to Mason City where they had three children: Tim, Kevin, and Lori. Elaine’s sewing skills were second to none, making clothes for herself, Lori, and countless dolls. In 1965, the family moved to Havana, Illinois where Joel managed the Skelgas Store. Elaine and Joel built a wonderful life, full of laughter and lifelong friends. Through it all was the sound of music, with Elaine teaching organ lessons, directing the church youth choir, and leading the band boosters.

After Joel’s passing in 1975, Elaine returned to Forest City where she worked for Waldorf College as secretary in the Music department and later in the Clerk of Courts office. She was also active in the Immanuel church choir and ladies’ circle. While at the Surf Ballroom, she met Richard (Dick) Campney, and they were married September 7, 1987. Elaine and Dick enjoyed ballroom dancing and delivering Winnebago motor homes across the country, sampling ice cream along the way. They also delighted in sharing the roses from their garden. When Dick’s agricultural job took him to Egypt, Elaine joined him for a portion of the travels and together they learned the local culture.

Elaine and Dick loved being grandparents, traveling to see grandkids across the country, fishing and baking with grandkids, teaching them ballroom dancing, and encouraging their love of music. They were both members of the Forest City Lions and proudly supported the FC Fine Arts Family. When grandkids traveled with the band and choir to perform, Elaine and Dick frequently joined them and on one occasion drove the accompanying respite Winnebago. Their smiles were familiar to many local youth whether from visiting classrooms to share their Egyptian experience or attending countless events. When asked, Elaine would always say she “Loved every minute of it”.

As an expression of sympathy, memorial contributions may be sent to Hospice of North Iowa or Good Samaritan of Forest City.
To order memorial trees or send flowers to the family in memory of Elaine S. (Cole) Campney, please visit our flower store.