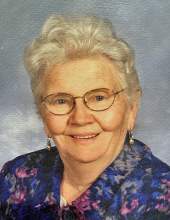 At the loving age of 94 years young, Elizabeth “Bettie” Johnson passed away December 8th, 2021 at the Westview Care Center in Britt.

A memorial service will be held 10:30 a.m., Tuesday, December 14, 2021 at the United Methodist Church in Britt with Rev. Robert Dodge officiating.  Everybody has a Bettie story, and we would love to hear them all. Inurnment will be at Evergreen Cemetery.

Memorial donations in Bettie’s name may be directed to the United Methodist Church or the Britt Public Library.

The family also wants to thank and acknowledge the numerous caretakers at the Summit House and Westview Care Center who watched over Bettie and listened to her sassy comments. She truly enjoyed her time there.

God definitely broke the mold when Elizabeth Louise Harriman was born to the late William Sr. and Naomi (Trainer) Harriman on July 29th, 1927. Growing up during the depression shaped Bettie’s formative years and resulted in a lifetime of frugality, collecting antiques, and hiding money under the mattress. She was also the oldest of four siblings, which is where we believe she learned how to boss people around.Bettie graduated from Kanawha High School in 1945 and started working as one of the first switchboard operators for the telephone company in Kanawha. It wasn’t long after this she was swept off her feet at the Surf Ballroom by Robert “Bob” Johnson. They were united in marriage on March 24th, 1947 at the Little Brown Church in Nashua, Iowa. To this union Lee, John B. and Scott were born and they tested her patience every day since. Bob and Bettie lived and farmed south of Britt until 1992, when they moved into town.Besides helping on the farm, Bettie worked at Winnebago Industries, and found roles in two of her favorite things: food and gardening. She oversaw the congregate meal program in Britt for many years and then managed the greenhouse at the Britt Food Center. The role that tested her the most though was raising three rambunctious boys who never seemed to listen. Their debate for “favorite son” will live on forever.After the boys “grew up” Bettie really got to enjoy her passions which included buying milk glass dishes at auctions, sewing, gardening, and reading. Over the years she sewed many patches onto her children’s and grandchildren’s clothing and stitched together many creations including a princess Halloween costume for Whitney. She was well-known for her green thumb and her ability to bring plants back to life. Throughout her life, Bettie never stopped learning and was a frequent flyer at the Britt Public Library. She was often referred to as the “expert” in the family because of her wealth of knowledge on a variety of topics, home remedies, and unsolicited advice.

Bettie was very active in the community. She was a member of the Britt VFW and the United Methodist Church, teaching Sunday School for many years. She never hesitated to speak her peace at the Britt City Council meetings. And was a huge fan of the National Hobo Convention every year, so much so that she was knighted as an honorary hobo and given the name “Boxcar Bettie.”There is no doubt that Bettie made a lasting impression with everyone she came in contact with, no matter if it was for a few minutes or many years. She had a slew of one-liners including her most infamous reply to when asked how she was doing, “Just as fat and sassy as ever!”Despite her bluntness, Bettie was a loving mother, grandmother, great-grandmother, sister and friend. Her family is going to miss her amazing cooking, especially her Christmas Eve apple crisp. Her frequent newspaper clippings, the sassy comments, and her ability to always keep them on their toes.

Bettie is survived by her three sons, Lee (Chris) of Richburg, SC, John B. (Linda) of Britt, and Scott (Tammy) of Britt; three grandchildren, Ryan (Katie) of Britt, Justin (Mary) of Madrid, and Whitney (Aaron) Burke of Denver; seven great-grandchildren, Brody, Lane, Makayla, Payton, Brynlee, Reese, and one on the way.

She was preceded in death by her parents, her husband Bob, and her siblings Edith Kay, Bill, and Bob.

To order memorial trees or send flowers to the family in memory of Elizabeth "Bettie" L. Johnson, please visit our flower store.