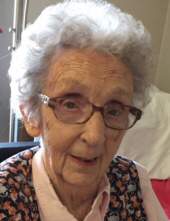 Visitation will be held from 5 to 7 P.M., Sunday at Cataldo Schott Funeral Home, 505 N. Clark St., Forest City with a Scriptural wake service at 4:30 P.M. followed by a rosary.

Memorials may be directed to St. James Catholic Church or Good Samaritan Society.

Elizabeth Jane Dean, the daughter of John and Ella (Dannehy) Bunting, was born June 15, 1921 in Chicago, IL. She attended St. Viator Elementary School and graduated from Alvernia High School in 1939. She continued her education at the College of St. Teresa in Winona, MN where she received her bachelor’s degree in dietetics. She worked at Charity Hospital in New Orleans as a dietician and then returned to Chicago and worked at Wesley Memorial Hospital. On July 23, 1949 she was married to Edward J. Dean at St. Viator Catholic Church in Chicago. They raised three children and she loved being a homemaker. They lived in Chicago, New Haven, CT, Prairie Village, KS, Needham, MA and Wilmette, IL. Summer vacations were spent fishing with her family in Michigan and Pittsburg, NH at the Glen Lodge. In October of 2002, they moved to Forest City to be closer to family. Betty enjoyed doing volunteer work in schools and at church. She also enjoyed golfing, bowling and swimming at the YMCA in Forest City. Her last 6 1/2 years were spent at the Good Samaritan Society where the other residents and staff became part of her family. She had many fun and memorable times while living there.

She was a member of St. James Catholic Church.

She was preceded in death by her parents; husband, Edward in 2006; sister, Mary Bunting; brother, John Bunting; and sister, Barbara Bunting.
To send flowers to the family in memory of Elizabeth J. Dean, please visit our flower store.