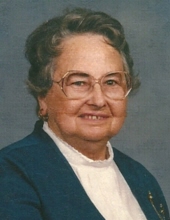 “God saw you getting tired so he put his arms around you and whispered, ‘Come with Me.’ A golden heart stopped beating, hardworking hands at rest.”

Born Feb. 8, 1917, in a farm home east of Lakota, Ella was the only daughter along with two brothers born to August F. Christ and Elsie (Gollnow) Christ. Ella was baptized and confirmed at St. Paul Lutheran Church in Lakota. Her education was in the Kossuth County rural school system. In her younger years, she was a clerk in Smith’s Grocery Store in Lakota. Ella married Robert Addy. Ella worked at Welps Hatchery in Bancroft and Green Giant in Blue Earth, Minnesota. In 1969, she moved to Forest City and joined Immanuel Lutheran Church, in which she participated in many of its activities. Ella worked at Winnebago Industries, Deluxe Products in Lake Mills and the Forest City school lunch program. She also was a member of the Senior Citizen Club and the 20th Century Club.

Survivors include two sons, Thomas of Los Angeles, California, and Dr. Eldean of Ventura, California, four grandchildren and one great-granddaughter.

Ella was preceded in death by her parents and stepmother, “Lottie,” two brothers, Walter and Paul and her daughter Roberta.

“We all need someone to believe in us…in who we are and all we can become. Someone to cheer, encourage, comfort and guide us, to give us the confidence we need to believe in ourselves and in our potential to reach our dreams.” Ella was that someone for her children.

A memorial service will be held at a later date. Mrs. Addy has been entrusted to the care of Cataldo Schott Funeral Chapel in Forest City.
angements are pending at this time.
To order memorial trees or send flowers to the family in memory of Ella Laberta Addy, please visit our flower store.
Send a Sympathy Card