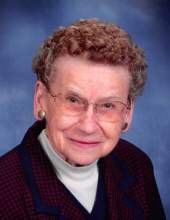 Funeral services will be held 10:30 A.M., Monday, March 20th at St. Boniface Catholic Church in Garner with Fr. Jim Dubert officiating. Burial will be in the church cemetery.

Ella Marie Ridder, the daughter of Raymond William and Meta Lena (Klinge) Buckley, was born February 24, 1928. She attended Liberty School # 5 and graduated from Klemme High School in 1946. After graduating, she worked at Mercy Hospital in Mason City and later for Dr. Dulmes of Klemme. On February 3, 1953, she was married to James William Ridder at St. Boniface Catholic Church in Garner. He was the love of her life and they enjoyed working side by side on the farm southwest of Garner raising hogs, dairy cattle and chickens. She also enjoyed sewing, cooking and gardening in her free time along with raising their daughters, Rose Marie and Diane. Ella Marie and Jim loved dancing, playing cards and later spent many winters in Brownsville, Texas, fishing and enjoying the warm weather. In 2003, they moved into Garner.

She was an active member of St. Boniface Catholic Church and Rosary Society.

She was preceded in death by her parents; husband, James W. Ridder; two brothers, Leonard and Maurice Buckley; and three brothers-in-law, Loren McLaughlin, Ralph Ridder and Paul Ridder.
To order memorial trees or send flowers to the family in memory of Ella Marie Ridder, please visit our flower store.