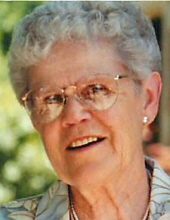 Funeral services will be held 1:30 P.M., Friday, February 6th at the United Presbyterian Church in Garner with Rev. Justin Asche officiating. Burial will be in Concord Township Cemetery.

Memorials may be directed to the United Presbyterian Church, Alzheimer’s Association or Care Initiatives Hospice in Cedar Rapids.

Elnore Ruth Larkin, the daughter of Archie and Hazel (Ford) Bowers, was born July 5, 1922 in Garner. She received her education in the Garner schools graduating in 1940. On August 29, 1941 she was married to Donald E. Larkin at Rockford, IL in the home of Lola and Robert Murphy, her sister. While making their home in Rockford she was employed at Burson Knitting Company. Elnore and Donald moved to Garner in 1950 where she stayed at home and raised four children. She enjoyed crocheting, quilting and helping others. Elnore was a very generous and loving wife, mother and was the world’s greatest grandmother.

She was a member of the United Presbyterian Church, UPW and the local VFW Auxiliary.

She was preceded in death by her parents; her husband, Donald in 2005; two sons, Charles A. Larkin and Donald F. Larkin; two brothers; and two sisters.
To order memorial trees or send flowers to the family in memory of Elnore R. Larkin, please visit our flower store.
Send a Sympathy Card