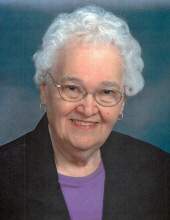 Visitation will be held from 4:00 – 7:00 P.M. Thursday, March 5, 2015 at Cataldo Schott Funeral Chapel in Forest City. Interment will be held in the First Baptist/Oakland Cemetery.

Memorials may be directed to Hospice of North Iowa or the First Baptist Church.

Emeline was born in Forest City, Iowa on September 9, 1921 to Lottie and Henry Nelson. She graduated from Forest City High School in 1938 and later graduated as a Registered Nurse from Mounds Midway School of Nursing in 1943.

Emeline married Glenn E. Johnson on October 21, 1949. While raising a family, Emeline continued working part time as a registered nurse in the Forest City hospital, until 1966 when she changed her nursing focus from the hospital to the Winnebago Public Health service. In her public nurse role, she was always out driving the roads of Winnebago County, getting to people that needed help, even in tough winter driving conditions. She retired as Director of Winnebago Public Health Nursing in 1986.

When Glenn passed away in 1991, Emeline turned her focus to volunteer work in the Forest City community including many years as a Hospice transportation volunteer and a Hospice Grief Counselor. Following is a quote from the North Iowa Hospice staff. “Emeline exemplifies the mission of Hospice through her gentle ways, genuine and generous caring with the terminally ill and the bereaved. Staying overnight, providing transportation, respite care and friendship are reasons why many request Emeline’s services”

She also volunteered at Waldorf, AWANA, RSVP, the Good Samaritan Center and as a reading coach at the Forest City Elementary School reading program. She served as a Board Member and treasurer of her condo association for several terms.

Emeline was a woman of faith and prayer and a member of the First Baptist Church her entire life. She served as a Sunday School teacher for years, the church clerk for years, a GMG leader, and on various committees including pastoral search committees.

Emeline always had a close connection with her Swedish heritage. She took her mother Lottie back to Sweden when Lottie was 83 to visit sisters and brothers that had not emigrated to the U.S. She completed four trips to Sweden. On her last trip, she made sure to bring chocolate Swedish coins (kronor) for the elementary students that she had coached in reading that year.

Emeline was preceded in death by her husband, Glenn Johnson; her parents, Henry and Lottie Nelson and her brother, Mauritz Nelson.

She is survived by her children and grandchildren; son, Steve Johnson and his wife Sue and their children Lindsay and Connor of Wilton, Connecticut and her daughter, Diane Johnson of Clive, Iowa.
To send flowers to the family in memory of Emeline C Johnson, please visit our flower store.