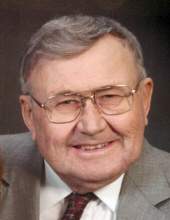 Funeral services will be held 1:30 P.M., Thursday, June 11th at Peace Reformed Church south of Garner with Rev. Robert Grossmann officiating. Burial will be in the church cemetery.

Visitation will be held from 5 to 7:30 P.M., Wednesday at the Cataldo Funeral Chapel, 160 E. 4th St. in Garner and will continue one hour prior to services at the church.

Emil J. Broers, Jr. the son of Emil and Cecil M. (Walls) Broers was born January 18, 1938 on a farm southwest of Mason City. Emil attended rural school in Bath Township in Cerro Gordo County and graduated from Rockwell High School in 1956. He furthered his education at Iowa State University where he received an agriculture education degree. On June 8, 1962 Emil was united in marriage to Anita Katter at Peace Reformed Church. The couple was blessed with three children. After teaching Voc. Ag in Ventura and Lemars, Iowa, Emil and his wife farmed south of Ventura. In his later years, during off season, Emil delivered motorhomes throughout the United States until his health would not allow it. He enjoyed his family, farming and traveling.

He was a member of Peace Reformed Church where he served as an elder, deacon and a Sunday school teacher.

He was preceded in death by his parents; and brother, Billy Broers.
To send flowers to the family in memory of Emil Broers, please visit our flower store.