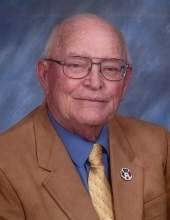 In lieu of flowers, the family wishes gifts to be given to the Hospice of North Iowa or Immanuel Lutheran Church in Forest City.

Emil Junior Damm, was born April 28, 1929 to Emil Damm, Senior and Mary (Madsen) Damm in Crystal Lake, Iowa. He died Thursday, December 27, 2018 at age 89. Emil attended Crystal Lake schools and graduated in 1946. He attended college in Evanston, Illinois before moving to Forest City, where he worked at Bowen’s Food Center. There he met the love of his life, Viola Caltvedt. The two were united in marriage January 7, 1951 at West Prairie Lutheran Church in rural Leland. Soon after, he entered the United States Army and was stationed at Camp Carson in Colorado Springs, Colorado. He was discharged in 1953.

Emil returned to Bowen’s where he was the produce manager until 1967 when he became the State Farm Insurance agent for Forest City. Viola worked part-time as his secretary. He retired in 1992 after 25 years with State Farm. Emil and Viola enjoyed traveling and took several trips together including to Colorado Springs, Las Vegas, Vienna, Hawaii, Denmark, and Norway.

An active member of the community, Emil was a member of the Forest City Jaycees, the Evening Lions Club, the Kum Along Club, and American Legion Post 121 and served on the Forest City Golf Club Board. His hobbies included golfing, bowling, fishing and playing bridge. He was a member of Immanuel Lutheran Church since 1953, where he served as an usher for many years and taught Sunday School. Emil was a loving husband, father, grandfather and great-grandfather.