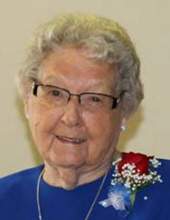 There will be no visitation. Memorials may be made in her name to the donor’s choice.

Cataldo Funeral Home is in charge of arrangements.

Emma Barz Palmby, the daughter of Frederick and Ada (Wenig) Kothenbeutel, was born July 5, 1913 on a farm west of Klemme. She attended rural schools of Hancock County and graduated from Klemme High School in 1932. On June 3, 1937, she was married to Ronald Barz at her parents’ farm west of Klemme. They lived in Garner before Ron enlisted in the US Navy serving his country during WW II. Following his honorable discharge, they lived in the Klemme area until moving to Wisconsin and Minnesota. Emma worked as a secretary at Lakeland College in Wisconsin and when they moved back to Klemme in 1966, she did custom upholstery work for several years. After Ron passed away in 1989, she moved to Prairie View Apartments in Garner. In 1999 she married Clarence Palmby of St. Paul, Minnesota. After Clarence’s passing Emma returned to the Garner area. She enjoyed crocheting, needle point and other sewing projects, completing her final family heirloom at the age of 101.
Emma was a member of Peace Reformed Church.

She was preceded in death by her parents; first husband, Ron Barz and second husband, Clarence Palmby. Also preceding her in death were son-in-law Gary Lenz, sister Gladys (Marvin) Barz, and brother Harold (Betty) Kothenbeutel.
To send flowers to the family in memory of Emma S. Barz Palmby, please visit our flower store.