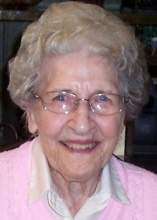 Visitation will be held from 5:00 to 7:00 PM on Thursday, March 27th, at the Cataldo Funeral Chapel,160 E. 4th St., in Garner with a Scriptural wake service at 7:00 PM. Visitation will continue one hour prior to services at the church.

Memorials may be directed to St. Boniface Church.

Erma Linda Schmidt, the daughter of Louis & Emma (Busch) Schmidt was born on March 31, 1918, on the family farm southwest of Garner. She attended Garfield Township School No. 8 and graduated from Garner High School in 1936. After working at the ASCS office in Garner, Erma retired from that position after 34 ½ years of service in August of 1974. She then worked at the E. F. Johnson Company in Garner for 2 ½ years. "Ermie" and her twin sister, "Addie," reached their 90th birthdays on March 31, 2008. Following the death of Addie on April 22, 2008, Ermie remained on the family farm until her move to Cardinal Grove Assisted Living in Garner on September 13, 2008.

Erma was a member of St. Boniface Catholic Church and St. Boniface Parish Life. She had been active in the Garner Senior Citizens and card club groups. She enjoyed crossword puzzles, reading and her home at Cardinal Grove. Her nephews, nieces, great and great-great nieces and nephews meant the world to Erma.

Erma will be sadly missed by those who knew and loved her.

To order memorial trees or send flowers to the family in memory of Erma Linda Schmidt, please visit our flower store.