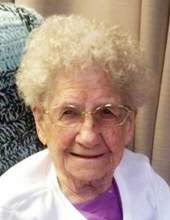 Per her wishes, cremation has taken place. Private graveside services will be held at Evergreen Cemetery in Britt.

Esther May Rapp, the daughter of John and Johanna (Sweers) Brouwer, was born July 20, 1919 in Britt. She attended country school near her home until the eighth grade. Esther was married to Harold Rapp on June 7, 1939. They lived in various towns in north Iowa before settling in Thor, Iowa. After Harold passed away in 1976, she moved to Garner where she operated her own daycare business until retiring at the age of 85. She enjoyed sewing, quilting and embroidery work. She was a member of Zion Evangelical and Reformed Church in Garner.

She was preceded in death by her parents; husband, Harold; infant son, Duane; and three daughters, Darlene “Pat” Lewerke, Jeannie Braun and Bonnie Glenn.
To send flowers to the family in memory of Esther M. Rapp, please visit our flower store.