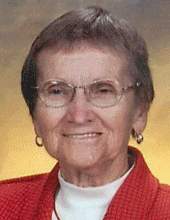 Funeral services will be held 10:30 A.M., Tuesday August 26, 2014 at St. Boniface Church in Garner with Fr. Dennis Miller officiating. Burial will be in St. John's Catholic Cemetery in Duncan.

Visitation will be from 5 to 7 P.M., Monday at the Cataldo Funeral Chapel, 160 E. 4th St., in Garner with a rosary at 5:00 PM. Visitation will continue one hour prior to services at the church.

Esther Ann Nedved, the daughter of Edward and Barbara (Paca) Trca, was born August 22, 1922, on a farm south of Hayfield. She attended and graduated from Hayfield Consolidated School. On April 19, 1944, she was united in marriage to Charlie R. Nedved, Jr. at St. Wenceslaus Catholic Church in Duncan. The couple farmed south of Hayfield until 1951 when they moved to a farm near Miller. Esther worked at the Chuck Wagon Café in Forest City, Garner Sale Barn, and Bill's Family of Foods in the Deli department. She enjoyed baking, cooking, gardening and loved her flowers.

She was a member of St. Boniface Catholic Church, Rosary Society and Catholic Workman FCSLA.

She was preceded in death by her parents; husband, Charlie R. Nedved, Jr., August 12, 1980; a brother, Ernest (Emily) Trca; and a sister, Evelyn Marie Trca. CATALDO FUNERAL HOME (641) 923-2841 www.cataldofuneralhome.com
To send flowers to the family in memory of Esther Nedved, please visit our flower store.