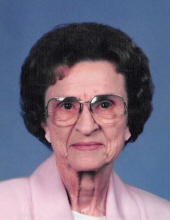 Funeral services will be 10:30 a.m., Friday, May 21, 2021 at Cataldo Funeral Chapel, 160 E. 4th St., Garner with Rev. Michael Shaffer of the United Methodist Church officiating.  Burial will be at Concord Township Cemetery.

Visitation will be held from 5:00 to 7:00 p.m., Thursday at Cataldo Funeral Chapel and will resume one hour prior to services on Friday.

Eunice Irene Johnson, the daughter of Thomas and Esther (Malek) Blank, was born May 25, 1923 on a farm near Hayfield.  She attended and graduated from Hayfield Consolidated School where she was the band majorette.  Eunice was employed at Northwestern Bell Telephone Company in Garner as a switchboard operator for several years.  On June 15, 1944 she was married to Donald Johnson at the United Methodist Church in Hayfield.  They lived all of their married life in Garner.  Don and Eunice owned and operated a restaurant/garage/cabin business on the east side of Garner until she decided to stay home and raise their children.  In 1954 they moved into their new home on the west side of Garner which was built by Don and his brothers.  After Don passed away in 1976, she continued to live in her home.  At the age of 53 she decided to get her driver’s license and began driving on her own.  She enjoyed her family, putting together puzzles, crocheting, knitting, embroidery and watching Wheel of Fortune.

She was preceded in death by her parents; husband, Donald; sister, Marcia Blank; and brothers, Lee, Jack and Curt Blank.
To order memorial trees or send flowers to the family in memory of Eunice I. Johnson, please visit our flower store.
Send a Sympathy Card