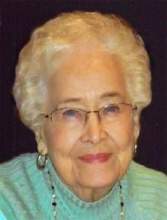 Funeral services will be held 10:30 A.M., Wednesday, December 18th at the United Methodist Church in Forest City with Rev. Chuck Layton officiating. Burial will be at Oakland Cemetery in Forest City.

Memorials may be directed to the family of Florence L . Johnston or the United Methodist Church, Forest City.

Florence Lucile Johnston, the daughter of Hilmer and Julia (Lilleskau) Hanson, was born October 28, 1922 on her parent's farm east of Lake Mills. After graduating from Lake Mills High School she worked in Pella, Iowa and later moved to Des Moines where she sold government bonds. On October 8, 1944 she was married to Robert E. Johnston. They lived in the Forest City area all of their married life. In later years, they wintered in Mesa, AZ where they enjoyed golfing and visiting with all their friends and family. Florence was President of the Village Grove Grovettes in Mesa for several years. She lived a very active life and was a member of many organizations. As a member of the United Methodist Church she enjoyed being a member of her circles and Ladies Aide and, in earlier years, singing in the choir. She also was an avid china painter and loved music and playing her organ. Among her other interests were golf, playing bridge and other card games and reading. Florence loved traveling and thoroughly enjoyed a couple trips to Norway, which is where her family roots for her mother and father began. One of her most recent cherished accomplishments was completing the genealogy for her family heritage on both sides of her family. Florence's love of family and friends was evident to all who knew her. She was a friend of everyone and her endearing, optimistic nature was contagious. She always looked on the brighter side of things. She will be missed dearly.

She was preceded in death by her husband; parents; a brother; three sisters; parents-in-law; two sisters-in-law; four brothers-in-law; two nieces; not to mention many dear friends.

One of Florence's favorite messages was, "There are many languages in the world...a smile speaks them all."

To send flowers to the family in memory of Florence Lucile Johnston, please visit our flower store.