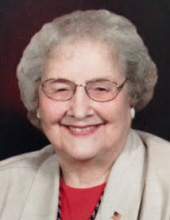 Burial will be at St. John’s Catholic Cemetery in Duncan, IA.

Visitation will be held 4:00 to 7:00 P.M., Friday at the Cataldo Schott Funeral Chapel in Forest City with a Rosary Service at 4:00 P.M. and a Scriptural Wake Service held at 7:00 P.M. Visitation will also continue one hour prior to the service at the church on Saturday.

Florence Margaret Currier, the daughter of Fred and Ida (Kolb) was born in Sanborn, MN on September 28, 1928, while her mother was visiting relatives. Florence graduated from Holy Family Catholic School in 1947 and worked as a nurse’s aide at Mercy Hospital in Mason City, IA, where she met her future husband, Donald Kudej. On January 4, 1949, they were married at Holy Family Catholic Church in Mason City, Iowa. They made their home on a farm near Duncan until 1955 when they moved to a farm near Wesley, IA. In 1963, they moved to their acreage in Forest City, IA where they raised their 6 children.

Florence was a dedicated wife and mother, but she also had a gift of service to help others. She worked at the Forest City Municipal Hospital until her retirement in 1990. After her retirement, she continued as a Winnebago County Home Health Aide for 10 years. After the loss of her husband of 61 years she moved to Madrid, IA, in 2010.
Throughout the years Florence was a member of the Forest City Ambulance, Catholic Daughters of America, American Legion Auxiliary, St. James Guild, Farm Bureau Women, and various neighborhood clubs. Family was very important to Florence. Many holiday traditions and Christian values were practiced and are carried on by her children and grandchildren. Florence always baked kolaches for family gatherings; she enjoyed making crocheted gifts; she loved reminiscing about the railroad as her dad was a train engineer; she enjoyed watching reruns of her favorite TV shows, especially Lawrence Welk.