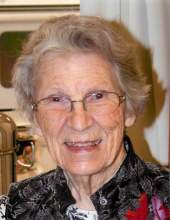 A memorial service will be held 10 A.M., Tuesday at Pilot Knob Lutheran Church southeast of Forest City. A private burial will be held at Brush Point Cemetery near Fertile.

There will be no visitation. Cataldo Schott Funeral Home is in charge of arrangements.

Frances Mae Benson, the daughter of Arthur and Clarinda (Halverson) Brenden, was born October 17, 1923 in Fertile. She grew up on a farm west of Fertile and graduated from Fertile High School. Frances continued her education at St. Olaf College in Northfield, MN. During her summer breaks from college she was employed as a laboratory assistant for the University of Minnesota researching penicillin and chlorophyll. After graduating from St. Olaf in 1945 she became a laboratory instructor at the college for one year. On October 26, 1946 she was married to Stanton Benson at Fertile Lutheran Church. They lived near Joice where they raised their children. After their children were in school, she taught in the science department at Lake Mills Community High School for twenty-seven years retiring in 1986. She continued to live on the farm until 2015 when she moved to Forest Plaza Assisted Living in Forest City. She enjoyed reading, gardening, quilting and Bible studies.

She was a member of Pilot Knob Lutheran Church where she was part of Women of Life Ministries and belonged to Martha Circle.

She was preceded in death by her parents; husband, Stanton; and a sister, Lavonne Petersburg.
To send flowers to the family in memory of Frances M. Benson, please visit our flower store.