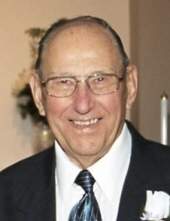 Graveside services will be held 10 A.M., Saturday, May 5th at St. Boniface Catholic Cemetery in Garner with Monsignor John Hemann officiating. Military rites will be conducted by the Garner Veterans Ceremonial Unit. A gathering of friends and family will follow the service at the VFW in Garner. Arrangements are with Cataldo Funeral Home of Garner.

Francis was born on January 29, 1922 in Liberty Township near Britt, IA, the only son born to John W. and Estella (Formanek) Falada. He attended Garfield #8 School near Garner through 6th grade, then Hayfield Consolidated School into the 10th grade when he was needed to help with the family farm full-time. He served 19 months in the United States Army; one year served with the occupational forces in Japan. Shortly after his discharge, he married Anna M. Simper on September 16, 1947 at St. Boniface Catholic Church in Garner. They lived on Anna's mothers farm until 1954 when they moved into Garner.

Francis spent a number of years driving anything that had wheels and an engine. During the 1940's, he owned a small trucking company. He sold his trucks in 1951 to manage his mother-in-law's farm until it was sold after her death in 1953. He then went to work at Ziesmer Livestock as a driver and mechanic, then to Farm Service. In 1961, he went to work at Hancock County Oil Association as their petroleum transport driver, retiring in February 1987 after 25 years of service. Being someone who enjoyed traveling, he spent the next eight years delivering Winnebago motor homes throughout the United States and Canada. In October 1999, Francis and Anna moved to Des Moines, IA and he then worked part-time for Adesa Auto Auction for 4 years.

Since his early teens, Francis always enjoyed woodworking, metal work, and general repairs. He helped family and friends with everything from carpentry work to mechanical issues. Francis had few hobbies but was very proud of one; rebuilding Bolens garden tractors. He would find them in various conditions and restore them to new. He even built his own cabs for his snow blowing tractors (just give him a refrigerator and a clothes dryer).

He was a member of Catholic Workmen's Branch W051 and a lifetime member of both the American Legion Post #256 and Veterans of Foreign Wars Post #5515 in Garner. In 1971, he was also a founding member of the "Avenue of Flags" in Garner's Central Park.

He was preceded in death by his first wife Anna; his parents; sisters Agnes Simper and JoAnn Falada; and several brothers-in-law and sisters-in-law.
To send flowers to the family in memory of Francis "Frank" G. Falada, please visit our flower store.