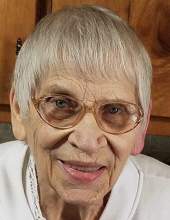 A memorial service will be held at 11:00 a.m., Monday, August 1, 2022, at Faith Lutheran Church in Miller with Rose Visser, lay pastor officiating. Inurnment will be at Madison Township Cemetery in Forest City.

Visitation will be held one hour prior to the service on Monday.

Memorials are preferred to the Forest City Ambulance Service.

Gail Ardice Reese, the daughter Samuel and Gladys (Beaumont) Glick, was born April 25, 1938, in Glasgow, Montana. She graduated from high school and continued her education at Waldorf College in Forest City where she met her husband, Marvin Reese. They were married on her parent’s 25th wedding anniversary on January 1, 1956, at Immanuel Lutheran Church in Forest City. They lived in Forest City where she worked at the Riverside Café. In 1967, they moved to their house in Miller where they raised their family. Gail worked for the Forest City Shopper and while there helped start the Forest City Ambulance Service. She also volunteered at the American Red Cross. During this time, she served as an EMT where she taught many people First Aid, CPR and all of the first responders courses. After the shopper, she began working at Winnebago Industries in the First Aid department until her retirement in 1999. After retiring from Winnebago, she worked for the Volunteer Express for a couple of years and also started sampling at Bill’s Family Foods in Forest City which became Hy Vee. Gail also helped in the lunchroom at Garner-Hayfield Community Schools and as a caregiver to an elderly lady. Who would have guessed Gail enjoyed acting? She was a part of the Forest City Acting Theatre for many years. She loved having family around, crocheting, reading, going to the cabin in northern Minnesota, fishing and videotaping family gatherings. One thing she was great at was untangling the cane pole knots that seemed to happen all of the time to her five kids. Gail loved having her grandkids come to her house and help them fill up water balloons for balloon fights.

She was a member of Faith Lutheran Church for over 50 years serving as the church secretary, organist, president of the congregation and was involved in many different women’s groups.

To send flowers to the family in memory of Gail A. Reese, please visit our flower store.