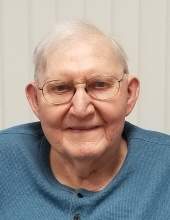 Upon his wishes he was cremated and Celebration of Life Services will be held at a later date.

Galen Alfred Borchardt was born June 7, 1929 on a farm near Grafton, Iowa, the son of Alvin and Elizabeth (Schmidt) Borchardt.

In 1935 he started school at the Union #7 school in Worth county and continued his schooling through the 8th grade. For the next years he helped his father and neighbors with farm work.

Galen entered into the United States Army in 1951. He attended basic training at Fort Riley, Kansas, from there he was stationed at Camp Gordon in Georgia for radio repair school. In Cape Charles he operated a signal corps weather station. He was honorably discharged from the service in 1953.

After the service, Galen worked in Mason City at the American Crystal Sugar Company. He was a foreman there until 1973 when the company closed.

On June 17, 1972 he married Melba Fox at the Forest City United Methodist Church. After they were married they made their home in Livermore, IA. Galen worked as a welder at Jet Company in Humboldt where he retired in 1987. After his retirement, Galen and Melba came to Forest City where they competed building their home on west Halverson St.

Galen enjoyed working with wood. He was handy in repairing and refinishing furniture for his many garage sales. He also enjoyed working at a shelter in Minneapolis where he prepared and served to hundreds of hungry people daily, he also delivered clothes to the less fortunate.

He is preceded in death by his parents; wife, Melba; sister, Delores Suby and two nieces, Peggie Sue and Rochelle Suby.
To order memorial trees or send flowers to the family in memory of Galen Alfred Borchardt, please visit our flower store.