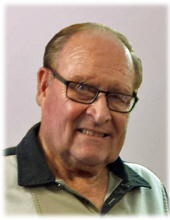 Funeral services will be held 10:30 A.M., Tuesday, February 16th at Peace Reformed Church south of Garner with Rev. Mark Larson officiating. Burial will be in the church cemetery.

Visitation will be held from 4 to 7 P.M., Monday at the Cataldo Funeral Chapel, 160 E. 4th St., in Garner and will resume one hour prior to services at the church.

Garold “Gary” Lenz, the son of Clarence and Ruby (Nielsen) Lenz, was born on November 27, 1939 on the family farm southwest of Garner. He was baptized and confirmed at Peace Reformed Church. He graduated from Klemme High School and attended Lakeland College in Wisconsin. He married Shirley Barz and to this union two children were born. He farmed with his parents and later his son, Steven. Gary also sold real estate for Schoneman Realtors for 30 years. He enjoyed fishing, traveling and spending time at their lake home.

He was a member of Peace Reformed Church where he served as a Sunday School Teacher, Deacon and Elder. He was also a member of the Garner Rotary Club. He served on the Klemme Elevator Board, Hancock County Pork Producers and was a current member of the Prairie View Board.

He was preceded in death by his parents; and father-in-law, Ronald Barz.
To order memorial trees or send flowers to the family in memory of Gary C. Lenz, please visit our flower store.
Send a Sympathy Card