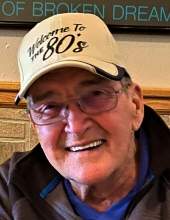 Gary D. Schisel, 80, of Garner passed away Tuesday, September 21, 2021 at Iowa Specialty Hospital in Belmond, surrounded by his family.

Due to COVID-19, a graveside memorial service open to the community will be held 10 a.m., Saturday, October 2, 2021 at Concord Township Cemetery in Garner.  Pastor Tedi Anne Hassapopoulos will be officiating.  The family requests that masks be worn at the service.  The service will be livestreamed on the Cataldo Funeral Home Facebook page. There will be no visitation.

Memorials may be directed to the Garner Fire Department.

Gary Dean Schisel, the son of John and Galya (Walkner) Schisel, was born May 6, 1941 at Iowa City, Iowa.  He graduated from Garner High School in 1959.  Gary worked at Winnebago in Forest City as a painter for a few years before partnering with Asa Gibbs owning and operating a local gas station, Ace and Gary’s DX Service.  On October 13, 1962 he married Donna Jean Ausmus at the United Methodist Church in Garner and to this union three daughters were born:  Kim, Molly and Kerry.  After Ace retired Gary became the full owner and changed the business name to Gary’s 66 which he continued to operate until his retirement.  After retiring he and Donna Jean wintered for ten years in Texas.  He enjoyed spending time with his family and friends, farming for J3B, golfing, working with wood and of course fixing cars.

He was preceded in death by his parents; sister, Mavis Peterson and her husband, John; and four brothers, Jack, Elling, Larry and Bob Schisel.
To send flowers to the family in memory of Gary D. Schisel, please visit our flower store.