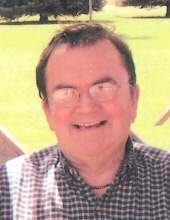 Burial of cremains will take place in Oakland Cemetery in Forest City with Military Honors performed by the Forest City American Legion Post # 121.

In lieu of flowers, the family wishes gifts to be given to the Gary Sheldahl Memorial Fund.

He was born August 20th, 1942 the son of Edward Levi Sheldahl and Ruth Mildred (Hertzke) Sheldahl. Gary grew up in Lakota, Iowa, where he attended and graduated from Lakota High School in 1960. From May 1960 to May of 1966 he served in the Airforce at Lackland Air Force base in Texas, Osan Korea, South Korea, and Blytheville, Arkansas. He achieved the rank of Airman 2nd class.

He was forced to retire due to his cancer.

On July 2nd, 1966 he was joined in marriage to Eleaner Jean Larson at Immanuel Lutheran Church Forest City, Iowa. They settled in Forest City.

Gary is survived by his wife of 52 years, Eleaner Jean (Larson) Sheldahl; two daughters and one son; DeAnna Hewitt (Jerry) of Mason City, Jennifer Jordahl (Jeremy) of Forest City, and Edward Sheldahl of Forest City, as well as, a brother and 2 sisters, Robert Sheldahl of Albuquerque, New Mexico, Diane Geilenfeldt of Baxter, Iowa, and Nancy Distler of Solon, Iowa. Gary is also survived by his 8 grandchildren, Rachael and Ryan Jordahl, Kelsey and Autumn Sheldahl, and Lois, Jeremiah, Allison (Cannon) and Brandon Hewitt; great-grandson, Leo; three sisters-in-law, Judi Larson, Marcia Larson and Sandy Larson, many nieces and nephews and all of his camping family.

Gary is preceded in death by his parents, brother, 5 brothers in law, 2 sisters in law, his nephew, and 3 nieces.

Gary had two loves in life, his family and the outdoors. He enjoyed camping, fishing, and gardening. His love for gardening blossomed in his later years, when he planted his vegetable garden and flowers at home and at Three Fingers Campground where he spent his summers with family and friends.
To send flowers to the family in memory of Gary E. Sheldahl, please visit our flower store.